We also put 50 gallons per acre on some Walla Walla sweet onions last spring. The farmer was amazed at the storability difference between the Humi-Zyme RX(tm) onion and the conventional one. The pictures were taken on September 30. The Humi-Zyme RX(tm) onion on the left lasted through the end of October. We are now trying it on a field infested with white rot, and so far so good. As of April 10, there is NO white rot showing up on the onions! (Update, May 7, 1999 -- still no white rot. See the photo below...........)

The last picture is of one of my famous cucumbers, using about two gallons of Humi-Zyme RX(tm) on a 10 x 20 foot garden area. The inside was perfect, and it was really sweet. Can't wait for all of this year's Humi-Zyme RX(tm) results to come in. Congratulations, Dynamite®, on yet another awesome product! 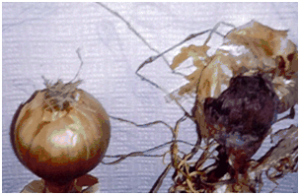 The statements made on this page​ ​reflect the opinions of Dynamite Independent Distributors. These statements have not been evaluated by the FDA and are not intended to diagnose, treat, cure, prevent or mitigate any disease. Products and suggestions should always be used in accordance with the opinions and expertise of your trusted health care professional, doctor and/or veterinarian.

Why do I need a Dynamite Distributor ID?